This Day in the American Revolution 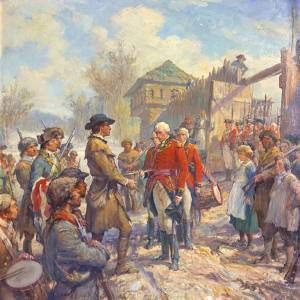 The Fall of Fort Vincennes (also known as Fort Sackville)

George Rogers Clark captured Fort Vincennes (Vincennes, Indiana) from British on February 24, 1779 from British Governor Henry Hamilton. On February twenty-third, the Americans surrounded the fort manned by 90 British soldiers. The patriots were outnumbered, but tricked the British and their Indian allies by dividing their own army into groups of ten so that it appeared that they had more than a thousand surrounding the fort. The Indians, in fear of capture, deserted the British to defend the fort themselves. Clark’s army took the fort without a single casualty. With the capture of the fort, the British army was removed from the Illinois territory, and the Native American tribes stopped attacking settlements in nearby Kentucky.

It is amazing what can happen in one short year. Just twelve months earlier, the main American force had trudged into Valley Forge a ragged, downtrodden lot. By the following April, the American’s were given a shot in the arm when the French sided with the Americans in the war and this turned things around. The following winter, Americans were back on track and this time had the British on the run.

Determining What We Really Want

Just as most of the Americans prior to the army’s winter at Valley Forge were waffling between whether they really wanted to remain independent from Great Britain or whether they wanted to give up and return to colonialism. I think we all have those moments. Sometimes we give up on the dreams that we had because they seemed too hard. Sometimes we press through. That was what happened for the Americans during 1778. They solidified their stance and when George Rogers Clark and his men surrounded Fort Vincennes, they were determined to raise the American flag above that fort. They had determined what they wanted and they were going after it.

As I read this, I think about the fact that I too have been waffling about what I want and what I want to do in certain areas of my life. For instance, in a few months I will be finishing my liberal arts degree, and I will need to begin working full time. In addition, I have been waffling about creating more healthful habits. During past few weeks I have been beginning to change a few of my habits, but as far as I can tell, I am still like the men who were training at Valley Forge. This past weekend I came to my own crossroads. Like the Americans who limped into Valley Forge, I have faced defeat after defeat. I felt as though nothing seems to have gone my way. The problem with me was that it is time that I determine what path that I will take. Will I be defeated, or will I become successful.