On this day in history, March 3 in 1791, the United States created its first federal tax. My upcoming novel relates to the backlash that started because of that decision to tax whiskey sales. I call this novel In the Shadow of the Mill Pond and as yet, it is still sitting in my computer archives waiting for me to take it from first draft to finished book. It is a mystery based in Pittsburgh, Pennsylvania when it was little more than a hub on the Ohio River. The story occurs during the event known as “the whiskey rebellion”. 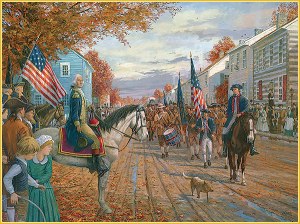 I have done some research on the subject and in the process, I have come to understand why the whiskey rebellion occurred. These western farmers were many of the same Americans had recently fought a war which they believed was against taxation and here the government started taxing them. No wonder these former revolutionary war soldiers were angry enough to come to arms. Tensions rose as the realization that anger like that could easily spread across the countryside infuriating patriot after patriot until full blown civil war broke out ending the infant nation. George Washington was wise to send troops to quell the uprising when he did. By his quick actions, what could have been the first civil war in the United States ended up becoming simply a blip in history.

Sending troops to western Pennsylvania ended the Whiskey rebellion, and the whiskey tax continues to this day. The only time the tax was not in effect was during prohibition when selling whiskey was illegal. The reason we have income tax today was because plans had been in the works to prohibit whiskey sales. The dilemma that created was the fact that the federal government needed some form of revenue because whiskey tax was the only tax the government required prior to prohibition. Of course, when prohibition ended, the whiskey tax resumed. Resuming the whiskey tax did not end income tax, however. Now our government has the legal privilege to tax us with both. 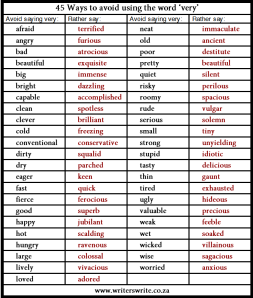 Although In the Shadow of the Mill Pond is currently in mothballs, that does not mean that I am not currently working on fiction. Currently I am working on editing my third novel in The Locket Saga called A Coward’s Solace. Editing takes as much work, if not more work than writing the book in the first place.

Just as the rules changed after the Revolutionary War from no taxation by the national government to taxation of the federal government, so rules change when a writer goes from utilizing the creative work of the muse to the diligent work of the internal editor. Certain words or phrases known as “cliches” need to be replaced by more descriptive, words that “show rather than tell” the story. One word that writers often have to get rid of is the word “very” above is  simple chart showing different words that a writer can use as a substitute for “very”.  This, of course, is one word of many cliches that each writer uses as a go to word or phrase. I have been learning mine and have done to prohibit using those words in the final draft. It is all part of my growth as a writer. Soon, any struggle I have with these cliches will become blips in my own writing history.