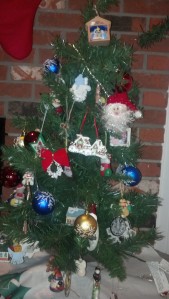 The Christmas tree is now lonely without all the gifts around it to keep it company.

Christmas was a day late at our house. Well, actually, it wasn’t, we just celebrated it a day later than everyone else. My husband is a truck driver and the load that he was supposed to get so he could make it back by Christmas was canceled. They had to get a load for him at the last minute which meant he ended up coming home over a day later than we had anticipated. I have learned that “you have to row with the flow” when you’re married to a truck driver.

Because we decided to postpone the regular festivities, on Christmas Day, my daughter and I went to see the movie The Secret Life of Walter Mitty I enjoyed it. I remember having read the short story when I was in middle school. I remember enjoying this James Thurber work although many other students I am certain found it less interesting. As a writer, I also have a secret life, a life where I vicariously live through characters who are of my own creation but who seem to take on a life of their own. The movie, like the book, was thought-provoking, and I think that Ben Stiller did an excellent job bringing the character to life in a unique way.

Yesterday we opened our Christmas gifts, one of mine was a writing tray which I am currently using to support my laptop on my lap as a write. I then cooked Christmas dinner.

Now this Christmas is over, and it is time to think about the coming year. I have determined that New Years resolutions do not work for me, but this part of December is the perfect time to reflect on the past year and to look forward into the next. As in the Christmas classic A Christmas Carol, a good question for me to ask myself is “Where do I want to be next Christmas and how do I get there?” In this story, A Christmas Carol, Scrooge discovers that his future isn’t predetermined. His life can be changed by changing himself. He learns that there is more to living than having money. His value as a human being is determined by the relationships that he develops as he generously gives to those around him–his business clerk (employee), his nephew (family) and the poor (charities). So to take a page from Charles Dickens and ask myself, “What can I do over the next year to foster a happier life?” What I do now and with whom I spend my time will determine how I spend next Christmas. Like Scrooge, I am the one who gets to decide my fate.

In Dickens A Christmas Carol, Scrooge is taken by the second ghost to view things as they are in the present. In this video, we see the Ghost of Christmas present taking Scrooge to the house of Bob Cratchet and his family.

The Ghost of my Christmas present is certainly in the shadow of the fact that we have lost two of our loved ones, one in October and one in November. Also the fact that my sister is currently in the hospital fighting cancer weighs heavy on my heart this holiday season. I feel a sudden urgency to complete writing my father’s poem book and memories of his life. I have gone through his poem book and typed out all of the poems and I have added important information such as his birth, marriage, the names and birth dates of his children, and other life milestones. I am however still looking for the stories that family and friends have to tell what they remember about that time of their life. I really need to ask my sister what she remembers about Dad. I remember things from my standpoint. What does she remember from his?

In addition to all of this, my trucker husband Jeff is stuck on the road this Christmas because the load he was supposed to pick up was canceled at the last minute. He spent Saturday, Sunday, and Monday sitting in California waiting to get a load back. He finally has one today. He should be home Thursday, so we’ll have our holiday together then.

Boni and her grandmother going to see The Nutcracker and making Christmas memories.

As with the Cratchet family, there have been some good times this season, however, and we have been making the best of it. For one thing, my Mother-in-law took my daughter to the Nut Cracker Suite Ballet. It was the first time for both of them and they both loved it.

In addition, we invited a couple of children over to help decorate Christmas cookies.

Then we brought a number of gifts to that same family.

I made caramels and peanut brittle because caramel is Boni’s favorite candy and peanut butter is Jeff’s favorite. I also made fudge which is my favorite.

My Daughter and I plan to see the movie The Secret Life of Walter Mitty at the theater on Christmas Day. She will open her gifts from her grandmother Christmas Day, but we will save the rest of the gift unwrapping until her Daddy is home.

We are choosing to remain positive despite the sadness and disappointments. We believe that we embrace need to the idea of sharing, giving and being grateful for all that we have and are able to give. It is certainly the time of year to reflect on all that is good in the world and we will do our best to carry it with us throughout the coming year.

Dolls I got for Christmas as a Child

My earliest Christmas memories always included getting dolls as one of the gifts. As I told in my post last Wednesday, the first Christmas I remember involved my doll Susanna, going to Aunt Mabel’s and my brother Tom’s birth (Which incidentally  his birthday was yesterday.)

The next Christmas I remember involved getting another doll. I barely remember that doll. I don’t even think she had a name. This doll was one that had a turning head that would have the different faces on it. One face was angry, the next was sad and crying, one would be sleeping and the last face face showed that the doll was happy.

Another year, I remember getting Susy Smart. Susy Smart was a talking doll that sang her ABCs and 123s and taught me those things. What she taught me came in very handy when I started the first grade. That’s why she was Suzy Smart, she knew the important stuff.

The year I did go into the first grade, I remember getting my first Barbie doll. Actually, she wasn’t a Barbie, she was Barbie’s younger sister Skipper. She was my first of many Barbie type dolls that I would later get.

Susy Smart is on the left and Skipper, Barbie’s sister is on the right.

I remember Christmas being a time of special television programs. For instance, Rudolph the Red Nosed Reindeer was one of our favorites.

What holiday season would be complete without at least one adaptation of Charles Dickens’ A Christmas Carol. Here’s a video mash up of several different adaptations featuring Scrooge and the ghost of Christmas past.

Another Holiday Christmas favorite is Its a Wonderful Life. this is a trailer for 1946.

I also remember Dad reading his Christmas poems. I have shared two already, but this one was often a favorite of many who heard it

I went to visit Santa

He said on Christmas Eve,

That he’d come down our chimney

And Presents He would leave

For Old Saint Nick to do this,

It would really be a feat,

Because we have no chimney

We use electric heat.

Another aspect that I found important during the Christmas holiday was the food. Usually we went to one of the cousins’ homes for the holiday dinner and for the exchange of gifts. I remember enjoying the cookies and candies. Here are some links to recipes that I remember from when I was a child.

Goodies of Christmas Past 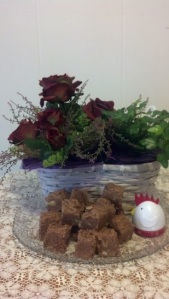 Thank you for joining me on this trip down Christmas memory lane. I hope you all have a Happy Holidays, Merry Christmas, and a Happy New Year!