Who was Saint Patrick?

Saint Patrick was the Christian missionary Bishop sent to Ireland around 450 AD. He was known as the “Apostle of Ireland” and became the patron saint of Ireland along with Saints Brigit and Columba.

At about 16 years old, he was taken from his home in England and taken as a slave to Ireland where he lived for six years. He then escaped and returned to his family. He became a cleric and returned to Ireland. Later in life, he became a Catholic bishop. Little is known about the specifics of his work. By 600 AD he was already considered the Patron Saint of Ireland. March 17 is observed in memorial of his death on that date. This day is celebrated in both Ireland and other countries as a religious and cultural holiday. In Ireland, it is both a Holy day and a day of festivals which celebrated the arrival of Saint Patrick and Christianity to Ireland. It has been an official Christian feast day since the early 1600s and is observed by the Catholic Church, the Anglican Communion (especially in Ireland), and the Lutheran Church. The holiday celebrates everything Irish and involves parades, festivals, and wearing green clothing and shamrocks. In addition, Christians attend church services. To allow for propagating the holiday’s traditional alcohol consumption and eating, Lenten restrictions are lifted for the day.

Here in the United States, St Patrick’s Day has been celebrated since the late 1700s. It celebrates the Irish and the Irish American culture. Celebrations include the wearing, eating, and drinking the color green, as well as religious observances, and parades. The holiday has been celebrated on the North American continent since the late eighteenth century.

This Day As it Relates to the American Revolution 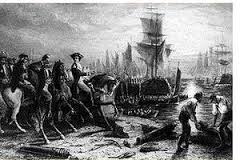 Another great event occurred on this date that I am certain  many Bostonians would be grateful that it occurred. On this date in 1776, British forces evacuated Boston and went to Nova Scotia. The British Army, first under command of Thomas Gage and then William Howe. William Howe realizing that he could no longer hold the city, evacuated with his forces as well as Loyalist citizens. Among them were Lucy Flucker Knox’s parents. Lucy had married Bostonian Henry Knox, the General who was in charge of the Continental Army’s artillery. Today in Boston and surrounding Suffolk County, citizens celebrate Evacuation Day which commemorates this event. Schools, local government offices along with some state government offices are closed on this day. It is a coincidence that Saint Patrick’s Day and this holiday falls on the same day.